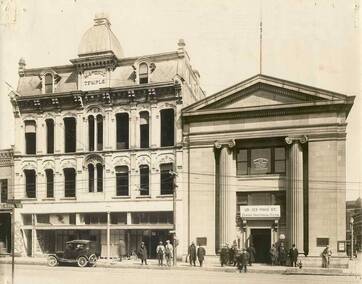 The Masons got their start in Oshkosh as Fox River Lodge F. and A.M. in 1849 (which is four years before Oshkosh became a city).  Many of the founders of the city were in fact Masons.  Additionally, many of the streets are named after Oshkosh Freemasons.  Their first meetings were held over a blacksmith's shop on the corner of Ferry and High Streets. Masonry's focus is on self-improvement, charity and bettering their communities.
Over the years, the Masons had several buildings throughout Oshkosh, losing them in the historic fires of 1859 and 1875.
In the early 1920s, with membership expanding, they began drawing up plans for an impressive temple building featuring all the modern conveniences of the time. 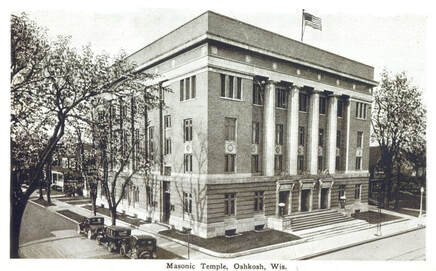 The new temple officially opened in May 1926. Designed in the neoclassical style by local architects Auler, Jensen and Brown, and built by C.R. Meyer and Sons, the new building cost more than $250,000, nearly $3.5 million in today’s dollars.
A state-of-the-art building, it contained several exciting, new conveniences, including an early form of air conditioning called a swamp cooler, as well as one of the area’s first elevators, which still passes regular inspection and is used today.
Inside, there are dining rooms, kitchens, lounges, and billiard rooms. The main ballroom, with its elevated stage and expansive two-story ceiling, seats more than four hundred people. Official meetings and masonic ceremonies are held in two elaborate lodge rooms, complete with balcony seating and ornate decorative features. There's also a museum containing masonic artifacts and histories. You can even find a Cold War era civil defense fallout shelter in the basement.

Much of the language and imagery used by modern Masons originated in 18th century England and is strongly symbolic. Even the word, temple, means a place of self-improvement. As you stand in front of the building, take a moment to look up at its second-story façade. Can you spot some of the ancient symbols of masonic virtues? The trowel spreads brotherly love; the cross stands for the Knights Templar; the plumb means staying on the straight, moral path; the square/protractor is to remind Masons to square their actions. The protractor draws a circle around proper behaviors. The level means everyone a Mason meets is on the same social level. The keystone is a symbol of completion. The 24-inch gauge and hammer represent the day: eight hours each for work, service and rest. The hourglass means time is fleeting, use it well. The Eye of Providence stands for the all-seeing eye of God. Fun fact: The Knights Templar and the Royal Arch Masons merged to create this lodge, hence some of the symbology included in the architecture.
Masonry has always had a strong social aspect. In the 1950s, the Oshkosh Masons had more than 3,000 members and social lives revolved around membership in such groups including the Knights of Columbus and the Odd Fellows. Prior to the creation of federal programs like Social Security, these organizations supplied a social safety net for members and their families when they fell on hard times.
​
​In 2009, Hollywood came to Oshkosh and the building’s exterior was part of a robbery scene in the John Dillinger film Public Enemies, starring Johnny Depp.