By petitioning for membership in a Lodge of Free & Accepted Masons at this time, you will be associating with a Wisconsin fraternal order that was organized in 1843 and in operation several years before our State was admitted to the Union. Freemasonry, however, dates its formal beginnings to the 17th century. Thus you will become, upon acceptance, a member of not only the oldest fraternity in Wisconsin, but in the world.

The history of Masonry in Wisconsin begins with Menomonie Lodge in Green Bay area, which at the time was the territory of Michigan. Although this lodge never became part of the Grand Lodge of Wisconsin, it is part of the Masonic history of our State. Seven members of the military and three civilians, all Master Masons, met on September 2, 1824, the first regular meeting was opened at Fort Howard. A charter was granted dated December 3, 1824, as Menomonie Lodge No. 374 on the rolls of the Grand Lodge of New York. Records of the Lodge were kept until 1827, and sometime during 1830 their lodge ceased to exist. 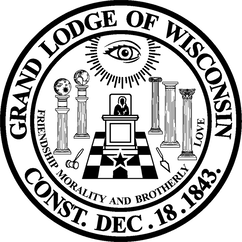 According to Lodge reports, a dispensation was granted, dated October 27, 1838, from the Grand Lodge of Missouri to a group of Masons to form a lodge in the Mineral Point area. A charter was granted on October 31, 1841, but the lodge was not fully organized until February 15, 1843, when it was consecrated as Mineral Point Lodge No. 49.
Melody Lodge of Platteville received its dispensation from the Grand Lodge of Missouri on January 10, 1843. The charter, dated October 31, 1843, was granted to Melody Lodge No. 65. In the coming months 35 Masons signed the by-laws.
On June 12, 1843, a petition was sent to Illinois to form a lodge in Milwaukee. On July 5, 1843, the lodge held its first meeting and was constituted under dispensation. A Charter was granted dated October 3, 1843, with the designation as Milwaukee Lodge No. 22 (now Kilbourn Lodge). The lodge records show there were 23 charter members.

At a meeting of Milwaukee Lodge No. 22, as a result of a communication received from melody Lodge at Platteville concerning establishing a Grand Lodge in the territory of Wisconsin, a committee was appointed to correspond with melody and Mineral Point Lodges. A Masonic Convention with seven members representing the three lodges was held on December 18, 1843, in Madison. During the course of the meetings a constitution was drafted and adopted and the Grand Lodge of the Territory of Wisconsin came into being on Monday, December 18, 1843. M.W. Benjamin T. Kavanaugh was elected the first Grand Master.
​
The First called Communication of the Grand Lodge was held in the city of Madison on January 17, 1844, for the purpose of granting charters to the subordinate lodges within the Territory. The three present lodges were now numbered according to the date of their dispensation or charter. Thus Mineral Point No. 49 was numbered No.1, Melody Lodge No. 45 of Platteville became Melody Lodge No. 2, and Milwaukee Lodge 22 became No. 3. During the first year of the Grand Lodge, three new lodges were organized under dispensation: Warren Lodge No. 4, Potosi; Madison Lodge No. 5 and Olive Branch No. 6, New Diggings.